A special Erasmus: the book “Qué fuerte” by Giorgio Graziotti presented in Viterbo On 2 July, the book  “Qué fuerte!” written by the differently abled Erasmus student Giorgio Graziotti was presented in the “Sala regia” of the town hall of Viterbo as part of the cultural event, “Caffeina”.

The event started with the greetings of the professor Stefano Grego, a pioneer of the Ersamus programme, who recalled his first students who joined the programme and are now part of the Academic Senate. The National Agency emphasised the value of Giorgio’s experience, referring to some passages of his book.

Giorgio’s journey towards Seville and then Madrid as an Erasmus student, was a cathartic journey like the one in the Odyssey and Joyce’s Ulysses, as Giorgio pointed out with irony in his book, which is full of funny and irreverent references also regarding disability. Giorgio suffers since he was born from visual imparity and motor disability which forces him to walk with crutches and to be accompanied by a carer. Giorgio graduated in modern philology from Tuscia University and thanks to his mother’s encouragement, central figure in the book, started his Erasmus adventure.

Giorgio also suffered along his journey. In the book there are two “noir” characters, between fiction and reality: the editor in Madrid and his girlfriend. These characters serve the specific purpose of emphasising that the Erasmus hero, like all the others, is not immune from suffering. Similarly, Giorgio’s disability, even if presented in an ironical and light-hearted way, offers a different perspective on Erasmus: encountering a different culture can ease the difficulty in relying on other people, especially for those who are completely dependent from another human being in order to survive.

Giorgio and the person who helped him to write, Licandro, read and commented some passages from the book, sharing funny parts of the book with an enthusiastic public, which was especially amused when the co-author sang a song by Gigliola Cinquetti with an ironic reference to Spanish girls’ “ars amandi”. The reading was accompanied by questions of the journalists Giulia Cerqueti and Giorgio Dell’Arti which concerned also Giorgio’s religion: Buddhism, until his father’s death. In many occasions, the public (among which was Giorgio’s mother) was moved to tears.

One of the strong points of Erasmus is the young age of its participants. This unique experience can change students’ lives making them aware of being part of a critical political and economic situation, which nevertheless can still be enliven and enhanced thanks to education. In this view, Giorgio’s story acquires new value and meaning: accepting and overcoming differences thanks to an unique experience which strengthened the relationship between the territory – which now includes also extra-European countries – and the people, and produced what is called the “Erasmus generation” as proof of the programme’s success.

A the end of the presentation, the girls who died in the Tarragona road accident, to whom the book is dedicated, were remembered as a sign that Erasmus doesn’t forget.

Thank you Giorgio! Enjoy your Erasmus all of you!

The Photo gallery of the presentation of the book “Qué Fuerte! Differently abled Erasmus” 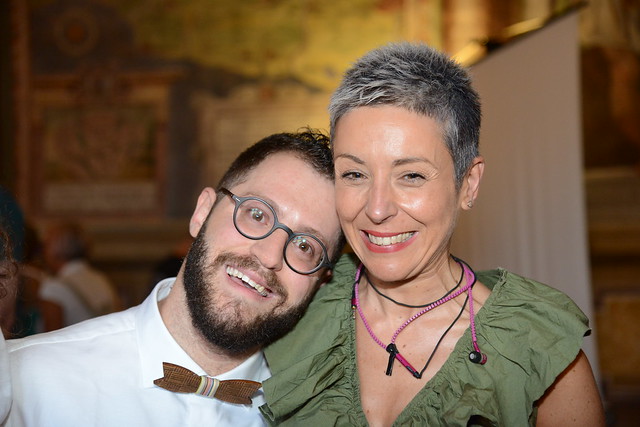