Fair Didacta inaugurated in Florence, the workshops have already started

The Minister, Fedeli: « I’m proud and thrilled to have brought this event to Italy» The first edition of Fair Didacta Italy, the event on the school of tomorrow in the da Basso Fortress from 27 to 29 September, has started today with the concert of the Erasmus orchestra and the welcoming speeches of the institutions involved.

Impressive numbers for the first edition of Fair Didacta Italy: 4,000 teachers enrolled for the 93 workshops, 150 national and international exhibitors and a 3,500 sq. m exhibition area.

The Minister of Education, Valeria Fedeli was present at the inauguration, «I’m proud and thrilled to have brought Fair Didacta to Italy after it has been held for 50 years in Germany».

The Minister talked about the current digital revolution  which « has changed production, consumption and human relationships and must necessarily change also learning and its environments».

According to the Minister Fedeli, « the digital world is like a motorway where all types of vehicles travel. Educators have today a grate responsibility, that is teaching to the young that in this motorway, which symbolises the network, there are also fake news and uncredited knowledge. In this context, teaching staff’s training and the new responsibilities of the school are at the core of the innovation process».

«Didacta has an impressive scientific programme made up of 93 workshops which are all completely sold out», The President of Indire, Giovanni Biondi declared, «During these days we should breath innovation. Our school is still too similar to the one we experienced as students, it stayed unchanged in a time of rapid changes in all sectors».

However, Bondi emphasised that innovation doesn’t mean something new or invention: «the use of a smartphone in class is not enough to change the school. We need to consider innovation in global terms in order to change time and spaces of learning and teaching. The programme of the Fair was built around these themes». Therefore, the transformation should be global because it concerns school architecture, learning environments, furnishings, methods and text books.

“The Fair is the result of the synergy and collaboration between all the institutions involved which produced great results – The councillor for Education of the Tuscany region, Cristina Grieco emphasised– Our objective is to make Fair Didacta Italy a reference point for Italy and for all the European countries of the Mediterranean area».

« Didacta is a hymn against the stereotypes of a malfunctioning Italy, an event breaking down ideological barriers conceiving school, institutions and enterprises as separated realities not collaborating with each other. It is also the practical example demonstrating that the school doesn’t belong only to the its operators, teachers, headmasters, administrations and students: the school belongs to the country, is useful for everyone and is made up of all the citizens», the Deputy Mayor of Florence, Cristina Giachi declared quoting the Priest Lorenzo Milani, according to whom «The teacher is a prophet who must be able to read the signs of the time».

«Having managed to bring, for the first time, Didacta, the largest event on school education, from Germany to Italy– the President of Firenze Fiera Leonardo Bassilichi declared –  is the tangible proof that Italy is a fully functioning country. The greatest satisfaction for us is that the German organisers are going to adopt some of our innovative solutions for the next edition of Didacta in Germany».

Click on the pictures to see the photo gallery 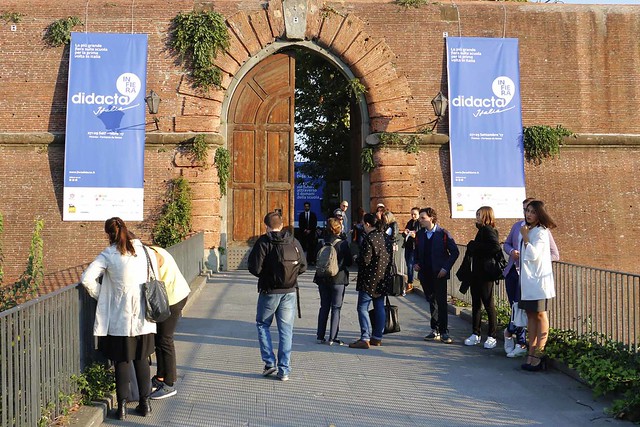 Fair Didacta Italy is organised by Florence Fair together with the main institutions of the territory: Tuscany Region, Florence City Council, Florence Chamber of Commerce; and Didacta International, with the support of the Italian Chamber of Commerce for Germany(Itkam) and Florence Convention & Visitors Bureau. Fair Didacta Italy is sponsored by the Miur; the European Policy Department of the Presidency of the Council of Ministers; the Embassy of the Federal Republic of Germany in Italy; the Italo-German Centre Villa Vigoni; Unioncamere, the Italian Union of Chambers of Commerce, Industry, Handicrafts, and Agriculture; and Assocamerestero, the Association of Italian Chambers of Commerce Abroad.

Indire, the National Institute for Documentation, Innovation and Educational Research is the scientific partner of Fair Didacta Italy and the organiser of the events. The online university IUL is the technical partner of the event.