Photos and videos from the eTwinning thematic focus in Rome The thematic conference “Empowering eTwinning Schools: Leading, Learning, Sharing” took place from 14 to 16 May 2017. More than 250 school leaders coming from all over Europe, national and Communitarian experts pooled together in the Italian capital to try to identify, recognise and promote the characterising elements of an eTwinning school.

The eTwining school label, inaugurated in the school year 2017/18 aims to valorise the work of schools engaged in the implementation of communitarian educational policies through the European community for eTwinning projects. More than 1200 institutes have been awarded and 200 of them were Italian.

The Rome’s event was organised by the Italian eTwining unit, in collaboration with the Central Unit in Brussels, the European Commission and Indire’s national agency Erasmus+ .

After the institutional greetings of Carmela Palumbo and Antonella Amatucci (Miur), Cecile Le Clercq (European Comission), Sara Pagliai (Indire’s National Agency Erasmus+) and Donatella Nucci (eTwinning national unit), there was a plenary session with the speeches of Patricia Wastiau, research consultant of European Schoolnet, who opened the convention with a speech on “Shared leadership” and on the advantages of this new organisational paradigm based on the valorisation of in-house expertise instead of traditional pyramidal leadership.

Paul Downes, associate professor and director of the Centre for studies on educational disadvantages of Dublin City University, intervened on the theme of inclusion and on how the communication process stemming out of eTwining can help school organisations to improve the relationships among the different actors involved in the educational contexts, and consequently students’ inclusion. According to Downes, the eTwining platform is indeed an effective tool to combat early school leaving and bullying.

Also during the plenary, Angelo Paletta, professor of the department of Business studies of Bologna University talked about “distributed leadership”, emphasising its impact both on improving school organisation and on the role of teachers and its positive impact on students’ learning outcome. As far as this aspect was concerned, in particular, Paletta emphasised the importance of eTwining in favouring confrontation and collaboration through new technologies and reduce the gap between policies and learning practices.

After the second day – entirely dedicated to training workshops – it came to Santi Scimeca, Manager of eTwinning at the Central Support Service run by European Schoolnet, who in the last day of the conference has entertained the guests with a panel of international experts to emphasise strengths and reflections on eTwining schools. Daniele Barca, school leader and member of Miur’s technical committee and Laura Maffei, teacher and eTwinning ambassador, participated for Italy.

The conference was concluded by Gilleran, eTwinning senior pedagogical advisor, who wished for the eTwining schools, teachers and school leaders to become increasingly more “actors of change”.

During the various workshop sessions the staff of the eTwining national Unit and the Indire researchers moderated some workshops on learning innovation, transformation of educational spaces, school leadership and enhancement of school quality.

Out photos of the event: 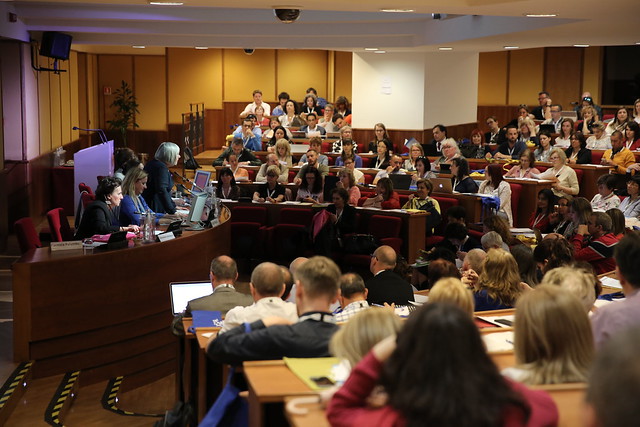