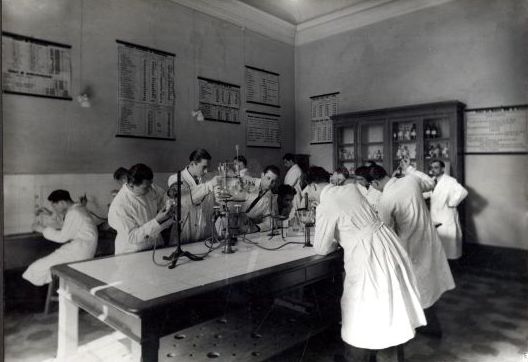 An article of Indire’s researcher Irene Zoppi has recently been published on the scientific biannual publication of the Italian society of photographic studies, “RSF. Magazine of Photography studies”. The feature, based on her master degree final dissertation, analyses part of the legacy of Indire’s photographic archive.

The article, which the magazine subscribers can find at this link, analyses 85 photographic albums (out of the 99 owned by Indire) which are part of the legacy of Indire’s historic archive, dated from the 40’s, when the National Didactical Centre (NDC), institutional predecessor of Indire, was established in Palazzo Gerini in Florence.

Irene Zoppi’s research analyses the core elements of the photographic albums, sets them in the historical period, and shows the specific characteristics and the possible communicative usage assigned to them by the Centre. We shouldn’t forget that the NDC was active during Fascism and that at that time the new school programmes came into force as provided for by the School Chart, wanted by the Minister of Education, Giuseppe Bottai. The NDC, according to the Ministry plan, would have played a key role in supporting and promoting the school world of that time.

The 85 photographic albums of Indire can be divided into two groups. In the first one there are the 42 Albums given to the NDC by schools, which vary in their size and material. They document the main aspects of school life (lessons, classes, didactic tools etc.).

The research shows that these albums were requested from the schools for documentation, in accordance with the Centre’s function of preserving and collecting didactic material for study. The NDC was never an images agency for the press and the Fascist propaganda. The albums were probably kept in Palazzo Gerini’s library where they were available upon request. In spite of the iconographic rhetoric of the perspective of the photos, emphasising the new school architecture, the Fascist symbols in the classrooms and the students wearing their uniforms, the professional photographers’ photos show artistic intentions not complacent with ministerial directives. It is not always clear if the albums were created especially for the NDC or for other purposes, but the fact that they were selected to be presented to the NDC testifies their usage in this context.

The second group of images is composed of 43 photographic albums realised directly by the NDC using single photos given by schools. The albums have all a rectangular format 31 x 39 cm, with a beige hardcover. Every album is dedicated to a technical and vocational institute specialising in agriculture, and they are still classified “National Didactic Centre of Florence” (classification which made it possible to date them from after 1941, the year when the Centre took on that name). Why did NDC make these thematic albums on technical and vocational institute specialising in agriculture? The reason is the school reform policy introduced with the School Chart, which gave great emphasis to technical and vocational training. The photos of these albums document the modernisation of didactics for the technical and vocational school specialising in agriculture, as it was required by the Fascist regime’s economic growth policy. The images depict students during lessons in class and in the open air, but show also classrooms and empty environments where technical tools and innovative mechanical devices can be clearly seen. Also in this case, the photos glued by NDC to the pages are a mix of professional and amateur pictures, and they were not entrusted by the Minister but were the product of the institutes’ creative initiative.

The analysis of Indire’s historic archive shows the unusual attitude of a ministerial institution which, even though defined “pedagogic machine of the regime”, didn’t use photography as a propaganda instrument.

“RSF – Magazine of Photographic studies”, published by Florence university press is a biannual publication of the Italia society of photographic studies (SISF). Our institute has collaborated with SISF to realise FotoEdu, the online catalogue of the Indire photographic archive, composed of 14 thousand photos divided by school grade, thematic area and region, from the end of 1800’s to the 1960’s. The photos concern different themes from school buildings, didactic activities carried out in schools (lessons, gymnastic exercises, shows, canteen views, scientific experiments, etc.) to the cultural activities carried out by the previously NDC, now Indire.