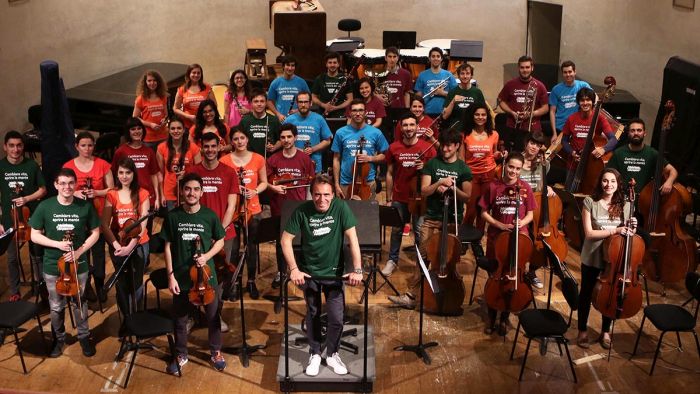 The Erasmus orchestra, the first orchestra made up of Erasmus students of the conservatories and Italian musical institutes, is going to perform in the inaugural concert of Fair Didacta, on 26 September in Palazzo Vecchio, in Florence, at 7pm. The concert is part of the fringe events of the Fair.

The Erasmus orchestra was created in May on the occasion of the celebrations for the 30 years of the Erasmus programme, and debuted at the Festival of Europe in Florence. On that occasion, 40 Erasmus students were selected from conservatories and Italian music institutes, and maestro Elio Orciuolo was confirmed as the conductor.

In the Didacta concert will be performing musicians from the conservatories of Florence, Trento, Cuneo, Salerno, Turin, Bologna, Mantua, Latina, Monopoli, Perugia, Lecce, L’Aquila and from the musical Institutes of Livorno, Teramo, and from the Fiesole school of music. Moreover, also on this occasion, there will be the vocalists of “Maggio Musicale Fiorentino” Academy.

The orchestra is the first in Italy composed of Erasmus students of conservatories and state recognised music institutes.

The idea of creating an orchestra made up of musicians who participated or are participating in an Erasmus studying experience came about in March 2017, on the initiative of the Indire’s Erasmus+ agency with the collaboration of maestro Elio Orciuolo for the 30 years of Erasmus celebrations.

The orchestra has also a symbolic value as an international and itinerant artistic ensemble, representing the feeling of European belonging, through the international language of music. The Erasmus orchestra is the symbol of a Europe “united in its differences”.

The orchestra will be performing also on 13 October in Strasburg, as part of the celebrations for the 30 years of Erasmus in France.

The concert in Florence on Tuesday 26 September at 7pm in Salone de’ Cinquecento of Palazzo Vecchio, in Florence, is free of charge and included in the events of Didacta Off.

To participate it is necessary to enrol at this link

Fiera Didacta Italy is the most important international event on school education, scheduled in Fortezza da Basso in Florence from 27 to 29 September. The event is sponsored by the Miur and organised by Florence Fair together with the main institutions of the territory (Tuscany Region, Florence City Council, Florence Chamber of Commerce) and Didacta International, with the support of the Italian Chamber of Commerce for Germany (Itkam) and Florence Convention & Visitors Bureau.  Indire is the scientific partner of Fair Didacta Italy and the organiser of the events. Enrolment to the workshops, seminars and events has already opened.

Official Hashtag of the event: #FieraDidacta Do you want to know more about the Erasmus orchestra?