More than 20,000 visitors at Fair Didacta. All the data of the great success of its first edition

The first edition of Fair Didacta Italy 2017 has just concluded. 20,000 people participated in the workshops and visited the stands of Didacta, the Fair for school education in the da Basso Fortress, in Florence, from 27 to 29 September.

A great result also for the exhibition area: 150 exhibitors from all over Italy, mainly from Lombardy, Piedmont, Veneto, Emilia Romagna and Sicily; 4 pavilions in a 25,000 square meters area; 9 international companies from Germany, Austria, Great Britain and China; 153 events and 93 workshops held in 18 conference rooms; 4,000 teachers enrolled for the workshops, 233 hours of scientific seminars with 460 speakers, including teachers, experts, and university and technical researchers. To be mentioned are also the 4 photo exhibitions showing images from the photo collections of: the priest Lorenzo Milani, the Bank of Italy, the Indire’s historic archive, and the Presidency of the Council of Ministers. Didacta Off had 18 events, including seminars, concerts and theatrical performances, which took place in the Murate complex, in the Auditorium of Sant’Apollonia and Palazzo Vecchio. Over 1,000 students and general public participated at the event.

The first edition also served to create a community of teachers as it emerged from social media analysis over the three days: almost 8,500 fans on facebook, 90% of whom are teachers, 9,000 video views, and 19,300 posts interactions. On twitter, the hashtag # Didacta2017 was among the trending topics in Tuscany during the three days of the fair. The Didacta Italy website was visited by 102,000 unique users with an average of 3.57 pages per head.

“The success of this first edition –  Leonardo Bassilichi President of Florence Fair stated – is the result of the teamwork of the MIUR, Fair Didacta International, Indire, the Tuscany Region, the City of Florence, Florence Fair and the other institutions and associations involved in the project. ”

Bassilichi continued: “We gladly welcome the input of the Minister Fedeli, who emphasised that Florence is the capital of the school of the future for Italy and the Mediterranean area. This was not just a success of the fair but of the whole of Italy, demonstrating the ability to organise the first international edition of Didacta out of Germany. We are already working, with the same enthusiasm, on the next edition that will take place from 18 to 20 October 2018 in the da Basso Fortress, convinced that we can be, from now on, the meeting place for the development of culture and excellence ” . “I am very pleased with the success of the event – Cristina Grieco, Councillor for Education of the Tuscany region commented – both for the data and for the general enthusiasm that we perceived by the stands and by taking part in the workshops and seminars on the scientific proposals set up on a regional and national scale. The fair was an important moment of reflection and exchange of experiences for the growth of our educational system. My hope is that the fair can become a fixed and indispensable appointment for the future of the school in our country.”

“Didacta marks a direction: Innovation can be learnt. – the Deputy Mayor and Councillor for education Cristina Giachi, declared – this appointment is the practical demonstration that the school is a common good not only for the values ​​it expresses but also for its key role in the civil development of the community. Here in Florence we have affirmed, against all the stereotypes, that with a spirit of innovation, a certain amount of imagination and a good organisation we can face the future, and imagine it as livable, especially for the formation and work possibilities for our young people. In this scenario, Florence has confirmed itself as an ideal place to present the most advanced Italian policy on school education. ” The first edition of Fiera Didacta Italia – the President of Indire Giovanni Biondi emphasised – ended with a very positive evaluation: over 4,000 teachers participated in the 93 workshops, curated for the scientific part by Indire. A reason for satisfaction, because this is the fundamental moment to promote change in the Italian school and to embark on the path of innovation of the educational model. The great turnout recorded in these days at workshops and conferences means that Italian teachers and headmasters wish to take part in the innovation process”. 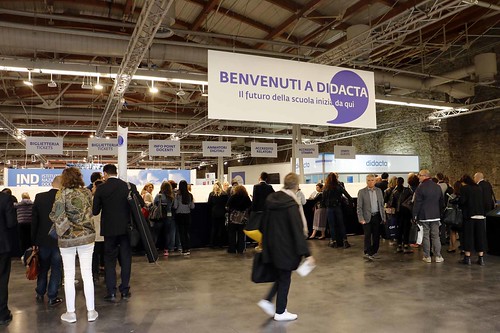