The data of the 2018 national monitoring study of the higher technical institutes presented at the Ministry of Education, University and Research (MIUR) 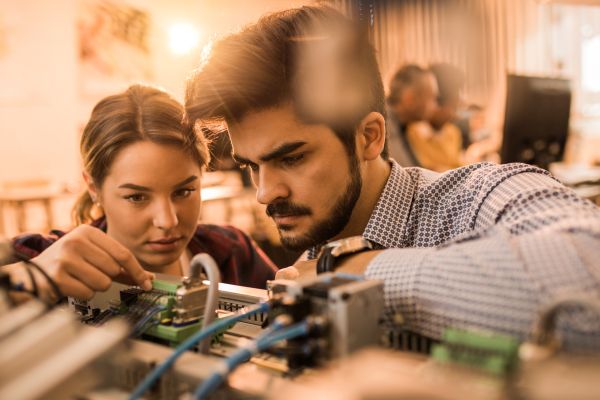 In 2016, 2,5% of higher technical institutes (ITS) graduates have found work within a year from graduation, and in 87, 3% of the cases, in an area related to their studies.

This emerged from the 2018 national monitoring study of the ITS, presented today at the Ministry of Education, University and Research by the Deputy Secretary for Education, Gabriele Toccafondi and Givanni Biondi, Indire’s President, who led the monitoring. The conference was also participated in by the Director General for school systems and the evaluation of the national system of education, Maia Assunta Palermo;  the Councillor for education of the Toscana Region and responsible for the technical coordination of the IX commission of the conference of the presidents of the regions, Cristina Grieco; the coordinator of the project “ITS 4.0”, Stefano Micelli; the coordinator of the project “ Review of national figures of ITS”; Alessandro Mele; and the vice-president of human capital management of Confindustria, Giovanni Brugnoli.

During the conference, a communication campaign aimed at spreading knowledge about the ITS and their potentials among young people, families and secondary school teachers, through different communication channels, was also announced.

The results of the monitoring

The data collection focused on occupational data a year after graduation, between the 1 January and 31 December 2016. Overall, 2.774 students and 113 study paths delivered by 64 Foundations (68% of the 93 existing Foundations) were monitored.

The technological area with the highest number of study pathways concluded by 31 December 2016 was that of New Technologies for the Made in Italy with 49 paths (43,4%). Followed by Sustainable mobility, with 18 paths (15.9%), Innovative technologies for cultural assets and activities/tourism, with 15 paths (13.3%), and Energy efficiency, with 13 paths (11.5%). Observing the details of the areas of the New technologies for Made in Italy, out of the 49 monitored paths, 21 refer to the mechanical system (42.9%), 10 to the agri-food system (20.4%), 8 to the fashion system ( 16.3%), 6 to Business Services (12.2%) and 4 to Real estate (8.2%). As far as enrolled, graduates and employed students are concerned, the area New technologies for the made in Italy prevails with 1,182 members, 963 graduates and 808 employed. Sustainable mobility follows with 445 enrolled, 357 graduates and 300 employed.

The graduates in the period considered by the monitoring were 2,193, out of this number, 82.5% found employment twelve months after the conclusion of the training, in 87.3% of cases in an area related to their studies. 383 graduates have not found a job. Out of this number, 101 enrolled on a university course. As for the types of contracts, in 47.45% of the cases, these were fixed-term contracts or self-employment with reduced rate of VAT; 29.89% of permanent contracts or self-employment under the ordinary VAT regime and 22.65%  were apprenticeship contracts.

The courses with the best outcomes (55 out of the 64 monitored) for number of graduates and employment rate after 12 months, had access to the € 13.3 million award from the 2017 National Fund, which had been increased by the 2018 budget law (+ 10 million for 2018, +20 million for 2019 and +35 million for 2020). These funds will have to be used by the ITS to realize an additional training path that will have as main objective the acquisition by students of skills related to the National industry 4.0. Plan. The area New technologies for the Made in Italy had the highest number of paths awarded (29), the majority of which pertained to the Mechanical System field (18). Followed by the Sustainable Mobility area (11 paths). The regions with the highest number of award-winning paths were Veneto (13 paths, 72.2% of the monitored paths), Lombardy (11 paths, 42.3% of the monitored paths) and Emilia-Romagna (7 paths: 53.8% of the monitored paths). The first three paths awarded are the ITS Umbria Made in Italy – Innovation, technology and development of the Umbria Region, The ITS A. Cuccovillo – New technologies for Made in Italy-Mechatronic mechanical system Area, of the Puglia Region and ITS Mechanics, mechatronics, engines and packaging of the Emilia-Romagna Region.

The Deputy Secretary for Education, Gabriele Toccafondi has expressed «full satisfaction for the results achieved by the ITS in these years of work. The study paths have increased by more than 40% from 2013, the enrolled students have tripled and now they are more than 10.000. Employment at 82,5% shows that the path we have taken is the right one. The fund increase (from 13 million euros per year to 35 million from 2020) allocated by the government with the last budget law – Toccafondi continued – demonstrated the willingness to invest more in order to increase the number of courses and students’ enrolment ,and boost the development of innovative technological tools connected also to the industry 4.0. Plan. We have done this for our youth and our industries and for them we had the courage to go on, and finally today, with great satisfaction, we can say: this is our country’s victory. Also in Italy there is a non-academic path leading to professional careers : the higher technical institute».