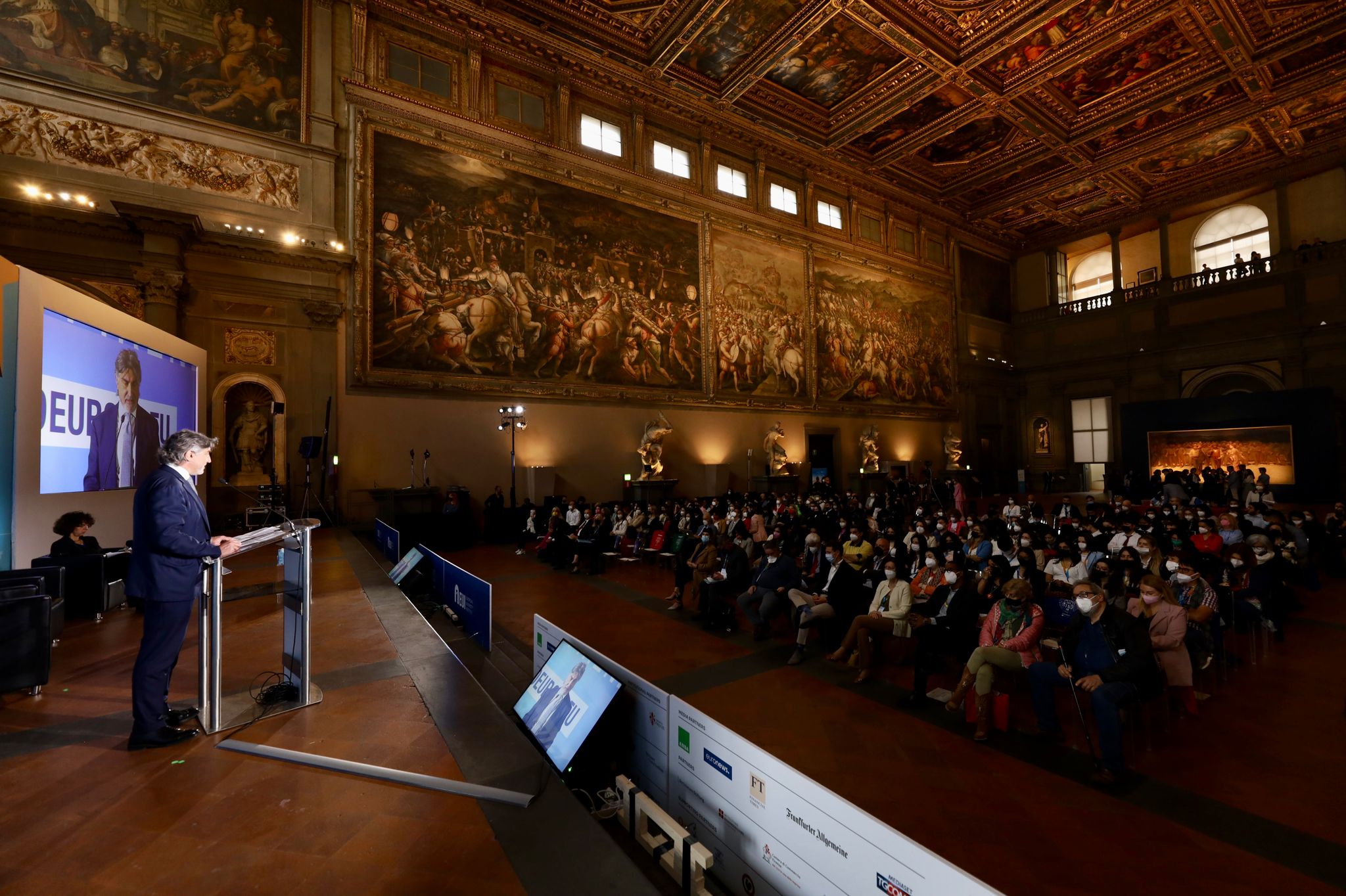 The conference “35 years of Erasmus: a success story“, organized by the Erasmus+ INDIRE Agency as part of the celebrations of the Festival of Europe, took place today in Palazzo Vecchio in Florence. Dario Nardella, Mayor of Florence and President of Eurocities, and Vittorio Calaprice, of the European Commission’s Representation in Italy, opened the meeting. Subsequently, Maria Cristina Messa, Minister of University and Research and Patrizio Bianchi, Minister of Education, intervened in video connection to highlight the role that the Erasmus programme had in building the European identity in the different sectors of the Programme. Andrea Belluzzi, Secretary of State for Education and Culture, University and Research of the Republic of San Marino, who recently signed the agreement to join the Programme, also took part in the conference works. The Director General of the Erasmus INDIRE Agency, Flaminio Galli, illustrated the growth path of the Programme in the 35 years of its history, introducing the second part of the conference, relating to the experiences brought by institutional representatives and students from the world of university, school and adult education.

“Erasmus has been and continues to be an extraordinary tool for European cohesion, undoubtedly the most effective and powerful project we have available for young citizens of the continent,” said the Minister of University and Research, Maria Cristina Messa. “It is the programme that has changed the way citizens perceive Europe, which has contributed to forming a true generation of Europeans, a generation that today has a fundamental role in shaping not only our present but above all our future. The Erasmus programme is having a central role for knowledge exchange and for the diffusion of democratic culture even in these months of war, with many requests and initiatives by Italian universities to extend the Erasmus+ scholarships for Ukrainian students and all those who have been granted international protection or who are asylum seekers fleeing the crisis. A concrete instrument of solidarity, welcome and integration”.

“Erasmus was a fundamental step in the construction of Europe – declared the Minister of Education, Patrizio Bianchi – because it gave our students the opportunity to have a daily exchange with other students from different countries, to know and recognize each other in other schools and universities”, said the Minister of Education Patrizio Bianchi. “Erasmus has shown that even different stories can become complementary if you learn how to talk to each other. Schools and universities are the fundamental pillars of a world of peace”.

“Thirty-five years ago, with the launch of the Erasmus Programme – said the Director General of the Erasmus + INDIRE Agency, Flaminio Galli – a new phase of change began, destined to transform the culture and roots of Europe. The growth of the exchanges has been strong and constant over time: from the first 220 students who left Italy in 1987, we passed the threshold of 35,000 young people who left for a study experience in 2021. The sense of belonging to the Union represents concrete, fundamental and irreplaceable base, to give complete form to the construction of a common European home. For this – Galli continues – the European Commission had the foresight and the courage to double resources on this front, making the Erasmus Programme one of the most important assets of the Union”.

The conference wanted to celebrate the most successful programme in Europe through the direct narration of its protagonists, students of all ages who presented Erasmus stories and experiences from the world of university, school and adult education.

The event also hosted the awarding of the Europascuola’s video contest “The Europe we dream of“, an initiative promoted by the Representation of the European Commission in Italy, Sapienza University of Rome and Indire, which was attended by 63 schools from all over Italy.

Erasmus + offers the opportunity to study, train, teach and carry out internships or volunteer experiences abroad; carry out cooperation activities between education and training institutions throughout Europe; intensify collaboration between the world of work and education. Since 1987, the Programme has allowed 12 million citizens to study and train in Europe, of which 600,000 were Italian students who had an Erasmus experience outside the national borders.

The conference is part of the initiatives organized by the Erasmus + Indire Agency within the Festival of Europe, the event underway in Florence until May 12, which with over 50 events brings Europe close to its citizens: https: // www.erasmusplus.it/iniziative_eventi/festival-deuropa/