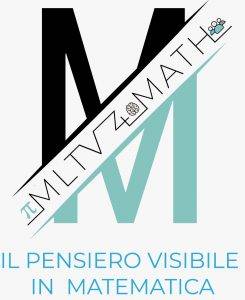 What is it worth learning in mathematics at the time of complexity and the fourth industrial revolution, with its dizzying speed of change making any knowledge rapidly obsolete? Beyond the choice of contents, it is certainly necessary to acquire a broad vision of mathematics teaching and the role it plays in society and consider it an opportunity to develop creativity, curiosity, critical thinking, planning, and a global mindset that allows to look at phenomena in a systematic way, understanding relationships and interdependencies between them.

In line with this vision, MLTV4MATH – Visible thinking in mathematics is a co-research project conducted by Indire with the teachers of the mathematics department of ISIS “Europa” in Pomigliano d’Arco.

The initiative was born in September 2018, as a spin-off of the more general MLTV project which was aimed at experimenting a combination of the two conceptual frameworks of Project Zero (Harvard University), Making Learning Visible (MLV) and Visible Thinking (VT) to support the development of thought and deep understanding, that is, meaningful learning, in the context of Italian upper secondary schools.

During the MLTV4MATH project, the co-research group studied and highlighted the peculiarities of the application of the MLTV framework to mathematics teaching, experimenting numerous thinking routines in class and analysing the related documentation in protocol-based discussions, with a specific focus on the main problems of mathematics teaching and learning, identified by the literature of the sector.

In particular, in the studied cases, the culture of thought promoted by the framework and its tools has shown that it can develop an epistemologically correct vision of mathematics. This is a conceptual vision that focuses on processes rather than products, thereby helping to prevent cognitive biases and negative students’ attitudes such as anxiety, fear and aversion that undermine the emotional well-being necessary for learning. These attitudes can generally be traced back to a procedural vision of mathematics, seen as a closed discipline, into which only those with natural talent, good memory and speed can penetrate. The subject is also generally completely decontextualized and therefore felt far away from students’ reality and for this reason they do not grasp its utility.

The arising of such biases can be avoided by discouraging the memorization of inert knowledge, shifting the emphasis from procedural skills to thought processes, and guiding students to progressively acquire typical forms of mathematical thinking (such as conjecturing, arguing, verifying, justifying, defining, generalizing, demonstrating) and get used to using them starting from real situations. The experimenting teachers saw, to their amazement and satisfaction, their students discussing mathematics rather than trying to somehow reach a unique and pre-existing solution or even just make a guess! It had never happened before. Furthermore, numerous observations in the classroom reported how the weakest students and those less likely to get involved in class dialogue, made their voices heard for the first-time during activities based on routines and protocols, enriching the discussion with noteworthy ideas and insights. Another interesting aspect is the problem approach phase, where a class work based on thinking routines has activated and brought out the narrative that helps to build, in the eyes of the students, a framework of meaning to the problem, not only in the first years of school, but also much further on. This is the premise for students to be encouraged to engage with the problem, to decide to try, and then use logical thinking in the solution phase.

in this project, the error in mathematics is not denied and “modestly” hidden. The error is brought to light and valued, in metacognitive activities based on specific routines, not as a symptom of a difficulty or a bump in the road, but as a necessary attempt in the learning process.

Finally, the versatility of the approach has made it possible to use it even at a distance and with integrated digital teaching.

The framework has provided teachers with working tools but also with a theoretical lens to interpret their practices in the context of their actions. They stated that they recognized that participating in a discussion group and co-research was for them a powerful form of professional development that led to transformative learning as the methodology and its tools will remain permanently in their professional practice, even after the project was completed.