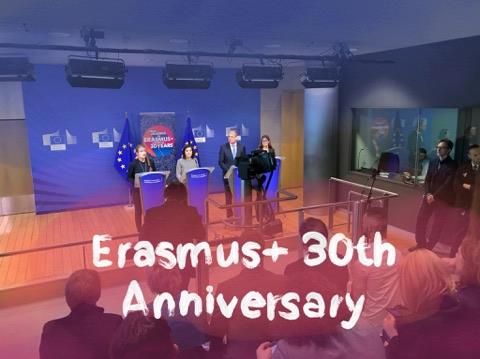 As the celebrations for the 30th anniversary of Erasmus came to an end on 30 November 2017, the European Commission published a report on the achievements of the Erasmus+ programme during 2016.

The 2016 Erasmus+ report confirms the key role played by the programme in building a more resilient Europe united around common European values.

With a 7.5% increase in the Erasmus+ budget compared to the previous year, the EU invested a record €2.27 billion to support 725,000 Europeans with mobility grants to study, train, teach, work or volunteer abroad. This brings the total to more than 2 million participants since 2014. In 2016, 21,000 projects received funding involving 79,000 education, training and youth organisations – 15% more projects than in 2015.

Commissioner for Education, Culture, Youth and Sport, Tibor Navracsics, said: “Erasmus+ has now reached the halfway point of its seven-year journey. I am proud to see how the programme has acted as a driver for unity in Europe, contributing to strengthening the resilience of individuals and our society. Erasmus+ mobility develops skills and competences and reinforces a European identity that complements and enriches national and regional identities. This is why we encouraged EU leaders meeting in Gothenburg on 17 November to work towards a European Education Area and to make mobility a reality for all by 2025, doubling the number of Erasmus+ participants and reaching out to people coming from disadvantaged backgrounds.”

The report demonstrates that Erasmus+ is well on track to meet its target of supporting 3.7% of young people in the EU between 2014 and 2020. It also shows that the programme has the potential to contribute to making mobility while learning a norm – a goal set out by the Commission in its Communication on “Strengthening European Identity through education and culture” discussed by the EU leaders at their Working Lunch in Gothenburg on 17 November.

In the 2015/2016 academic year, Erasmus+ enabled higher education institutions to send and receive 330,000 students and staff, including 26,000 to and from partner countries. France, Germany and Spain were the top three countries in terms of sending students and staff, while Spain, Germany, and the United Kingdom were the three most popular destinations.

The report also shows how Erasmus+ contributed to respond to wider social challenges in 2016. This includes actions to promote social inclusion and ensure that young people acquire social, civic and intercultural competences and learn to thinkcritically. This includes for example:

The publication of the report coincides with the closing of the campaign celebrating the 30th anniversary of the Erasmus programme and the presentation of the Erasmus+ Generation Declaration on the future of Erasmus+. Throughout 2017, more than 750,000 people took part in over 1,900 events in 44 countries to celebrate and discuss the future of Erasmus+. 65,000 articles on the programme were published and shared over two million times on social media, reaching over 90 million people. The new Erasmus+ Mobile App launched in June 2017 has already been downloaded more than 22,000 times.

In Gothenburg, President Juncker invited the EU leaders to double the number of young people in the EU participating in Erasmus+ by 2025, which will require a budget of €29.4 billion for the period 2021-2027. During their meeting, the EU leaders agreed to step up mobility and exchanges, including through a substantially strengthened, inclusive and extended Erasmus+ programme for all categories of learners.

Factsheet on the 30th anniversary of Erasmus

Factsheets on the European education area