Research, the new Indire’s study on small schools in Italy 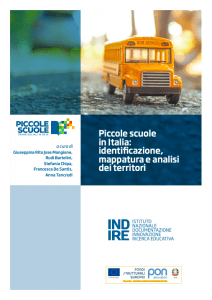 The report “Small schools in Italy: identification, mapping and analysis of territories” has been published. This is the result of the work carried out by the Indire research group on methodological and organisational innovation in small schools, as part of the National Operational Program (NOP) for schools.

The report provides for the first time a complete picture of the phenomenon of small schools in our country, defining in depth their number, distribution on the territory and the contexts in which they operate. Furthermore, homogeneous clusters have been identified in terms of geographic, demographic and socio-economic characteristics.

The regions where there is a greater number of small schools are: Campania, Lombardy, Piedmont and Calabria. The small schools are not only those on the smaller islands, or in remote and isolated places, but are also found in urban centres, in the suburban municipalities and in the marginal areas between city and countryside, which are very widespread on our national territory. They are places with diversified history, cultural identities and socio-economic contexts. For this reason, the relationship between institutions, schools and citizens can vary greatly according to their specific realities.

The first cluster represents the most isolated, peripheral and marginal territories, located mainly in the south. These are mainly municipalities located in the mountains, with a very low population density, which experience difficulties in transports and network connections. This cluster has the lowest number of municipalities (21.7%) and pupils in small schools (14.4%).

The second represents rather isolated territories, located in the internal areas of the country, but with a defined socio-economic fabric. The municipalities are mainly hilly and mountainous, with a medium/low degree of urbanization. They are mainly present in Lombardy, Piedmont, Lazio, Campania and Calabria. It has the largest number of municipalities (32.1%) among clusters, 28.6% of small schools and 25.9% of pupils.

The third group is made up of territories with the best socio-economic conditions, located above all in northern Italy. It is made up mainly of suburban municipalities and to a lesser extent by polo municipalities, with an average degree of urbanization, located in the plains and hills. This section contains the majority of both small schools (33.9%) and pupils (42.9%) who attend them (therefore many of the “big small schools” are concentrated here).

To conclude, the fourth grouping represents territories strongly connected with the economic and social fabric, with good socio-economic indexes, located above all in the flat and hilly areas of northern Italy, Piedmont in particular. They are mainly suburban municipalities, scarcely populated and rural, which sometimes present critical issues in transport and broadband connections. Among the clusters, it is the one with the lowest number of small schools (16.6%) and pupils (16.8%) after the first cluster, and includes 22% of the municipalities.

The mapping carried out by the Indire researchers for the territorial contexts of small schools is both a starting point for further research work in this area and on the Italian school system in general, and is also a tool to support an educational governance willing to plan carefully targeted actions on the different territorial and school contexts. The report also provides useful information to those involved in the revitalization of the territories, as small schools represent in all respects fundamental cultural centres for each community.

Download the report “Small schools in Italy: identification, mapping and analysis of territories” >>