CiPìaceMario. From 17 February the celebrations for the centenary of the teacher Mario Lodi 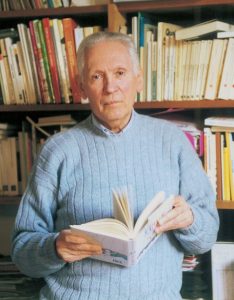 On Thursday 17 February, exactly 100 years after the birth of Mario Lodi (17 February 1922 – 2 March 2014), the celebrations that will commemorate the Lombard teacher, writer and pedagogist throughout the year will officially begin with the online initiative CiPìaceMario.

Exhibitions, films, seminars, documentaries, interviews, competitions and conferences that will follow one another throughout 2022, organised thanks to the dense network of collaborations activated on a national and international scale according to the pedagogical thought of the teacher of “doing together”.

A very rich calendar – presented on the official site of the centenary – which intends to enhance the experiences that numerous schools, associations and publishing houses are promoting to convey the importance of Lodi’s message and research.

The launch day of the centenary celebrations, Thursday 17 February, will be a real marathon of events broadcast live on the social channels of the Casa delle Arti e del Gioco – Mario Lodi (Facebook, YouTube) starting at 10 am.

The absolute protagonists of the morning will be the pupils and teachers who will present their audio and video works on the theme “If I was Cipì – The word to children”. In the afternoon (5pm -7pm), opened by the greeting of the Minister of Education, Patrizio Bianchi, there will be the official inauguration of the centenary. Francesco Tonucci, president of the promoting committee, and Juri Meda, professor at the University of Macerata, coordinated by Silvana Loiero (Giscel), will explain the meaning of the centenary and illustrate the main initiatives planned. It will then be the turn of a multi-voiced dialogue on the theme “The worlds of Mario Lodi” together with Ilaria Tagliaferri, director of “Liber”, Graziella Favaro, pedagogist, Giusi Quarenghi, writer, and the teacher Franco Lorenzoni. Finally, it will be possible to attend, always online, the theatrical performance by Giorgio Scaramuzzino “Cipì and Bandiera”, introduced by the essayist Carla Ida Salviati.

Among the various projects conceived for the centenary, we point out the contest “If I was Cipì”. The initiative, aimed at children, teachers and educators from all over Italy, invites them to follow the example of Lodi and to create stories together in various forms (podcasts, videos, writings, slides, etc.), enabling children to creatively express their thoughts and their vision of the world. The most significant works in terms of content, expressive capacity and originality will be published on the seiofossicipi.percorsiconibambini.it portal. Some works will be read and shown at the national event in live streaming on February 17 (you can send the materials by January 30, find here all the information to participate).

On the occasion of the centenary, some of the books written by the teacher will be re-edited, such as “Cominciare dal bambino” in a new Rizzoli BUR edition; “Il paese sbagliato”, with the introduction by Franco Lorenzoni for Einaudi Tascabili; “C’è speranza se questo accade al Vho”, in a new Laterza edition; “Il permesso”, new edition Giunti.

In collaboration with Rai Cultura and INDIRE, some interviews will also be broadcast throughout the year with the protagonists of the world of education, art and culture who will remember the figure of the great educator.

«Mario Lodi was a unique teacher, because like no other he left us writings that allow us to enter into his class and follow its development throughout the school years, observing the activities of students and teachers. But it would be a shame to spend this centenary year considering him an exceptional teacher, endowed with unique and unrepeatable skills, because he has tried all his life to be the teacher that the Italian Constitution promises to all Italian children and that the Convention on the rights of childhood provides for all the children of the world», explains Francesco Tonucci, CNR pedagogist and President of the organizing committee for the centenary celebrations.

The centenary was recognized by the Ministry of Culture as an event of national interest.

Partners of the initiatives are the House of Arts and Games – Mario Lodi, INDIRE, Impresa sociale Con i Bambini, GISCEL, Mind-In. The promoting committee avails itself of the advice of a scientific committee composed of some collaborators of Mario Lodi and other experts at national and international level.